The balance between quality and quantity in the Vietnamese pangasius industry has not been right thus far, admitted deputy director general of the directorate of fisheries, Pham Anh Tuan.

Producers have not done a good job either of ensuring standards in the race to expand, or of addressing the needs of the local market while it focused efforts on the US, EU and Japan, said Tuan, addressing the GOAL 2014 conference in Ho Chi Minh.

Now is the time for industry to consider a restructure, added Vo Thi Thu Huong of the Vietnamese Chamber of Commerce and Industry.

The production growth rate has finally slowed following a rapid increase since 2000, and as input costs have risen (largely on feed), demand in key markets, and so prices, have fallen.

“Now is the time to think about restructuring, with a focus on quality and certifications,” said Huong. The Vietnamese government has been supportive of pangasius already, with its decree 36 turning the industry into a strongly regulated one, she said.

“I hope this support continues, and from exporters and buyers in other countries too. We need to shift focus to a better quality product, adding value to our exports.”

The monitoring of producers should remain a priority, added Tuan. “For too long producers focused on increasing volumes, and on their revenues, at the cost of quality and sustainable development.”

Huong called for cooperation and a multi-stakeholder approach in bringing small scale farmers up to the necessary standards, and was one of many speakers to praise the model being introduced by National Fish and Seafood of clustering small farmers.

Among challenges faced by the pangasius industry, Tuan noted disease was almost as great a threat for the whitefish as it is for shrimp – for which total sales are expected to reach $3.5 million in 2014, up from $3.3m last year.

Production costs for pangasius, going towards feed, chemicals, and the cost of upgrading to intensive production, now add up to around 80% of the selling price, he said.

Tuan echoed Minh Phu chairman Le Van Quang in speaking about the pressures, and costs, on producers trying to catch up to certification standards. He too suggested that one harmonized scheme could save companies, and end consumers, money.

Vietnam aims to have 100% of its pangasius farms certified to its own VietGAP standard by December 2015, and this will need to be benchmarked against the many other standards, he said. 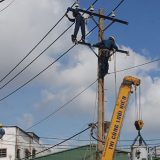